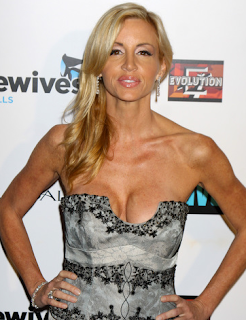 In case you haven't been following it, CNN has announced the latest strike in their campaign against integrity. First, there was the time Anderson Cooper asked former child star turned Born Again Christian proselytiser Kirk Cameron if the world is ending. Because KCam would know, of course. Then there was Piers Morgan and his whole Let's-treat-Condoleeza-Rice-like-she's-on-the-cover-of-Cosmo routine. And now CNN has made yet another bid for disgrace. The network has hired Camille Grammer, Real Housewife of Beverly Hills and estranged ex-wife of Kelsey, as one of their Oscar correspondents for Sunday's Academy Awards Broadcast. Okay, CNN. You've made your point. You have zero credibility and will soon be the news equivalent of Star magazine. Well done.
Posted by Renée Z. at 8:03 AM