Did They Mention She's Beautiful? 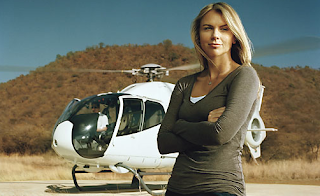 "Battle-tough beauty no 'wimpy girly-girl'" - the headline of a story in today's New York Post about Lara Logan, the CBS reporter who suffered a brutal sexual assualt in Egypt on Friday. In the Post's defense (sort of) the title references a quotation from an equally idiotic "source" who told the news rag, "She's not a wimpy, girly girl -- she had a pocket for lipstick sewn into her flak jacket as a joke." So while the post didn't coin that particular insulting phrase, they did manage to spin their report into a page long statement on Logan's looks and shocking toughness -- because that's what sexual assault is about: hotness and how wimpy women usually are. To wit, here's the opening of the article:

"When war reporter Lara Logan's co-workers learned that she had to be hospitalized after being attacked in Egypt, they knew it was serious. Logan, CBS's chief foreign correspondent, is known as much for her toughness as for her good looks, so it was clear things were bad."

Because if a woman is NOT known as much for her toughness as her good looks, then she'd probably be exaggerating the whole assault thing. Great point. I'm curious; would that supposed dichotomy be relevant to the seriousness of her injuries if she were a man? The article goes on to discuss Logan's beauty, modeling career, and love triangle -- along with a few paragraphs they threw in about her journalism career. I wonder what the angle would have been if Logan didn't fit the Post's definition of beauty? How would that story be told? I'm already sick to my stomach writing about this, so let's just remind the Post that Lara Logan is an amazingly brave and skilled reporter who has suffered an unthinkable horror. Stereotypes about her gender and sensational "news" items about her looks and love affairs is not only disrespectful to all women, but, much more importantly, insulting to Logan. Keep up the great work, NY Post.
Posted by Renée Z. at 9:27 AM