For Those Of You Dreaming Of Justifiable Homicide... 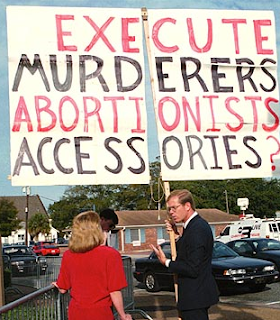 ...Just move to South Dakota! One catch: you'll have to kill a doctor who performs abortions. So, if you suffer from pro-life based or just plain old non-specific violent rage, you'll be glad to know that South Dakota lawmakers are considering a bill that would alter the state's legal definition of justifiable homicide to make it legal to kill an abortion provider. Bill 1171, sponsored by State Representative Phil Jensen, states that homicide is A-OK if committed "while resisting an attempt to harm" an unborn child related to the killer. Get it? If someone to whom you are related is planning to have an abortion, you will be able to kill anyone who tries to provide the abortion. So, if the Republican-backed bill passes, doctors, nurses, volunteers, and counselors in South Dakota will be easy targets for murder, and women will have to weigh control over their bodies against gun violence. That's cool. I think it's great when a leglislature gets what it wants by threatening people's lives. Isn't that what democracy is all about? Yay South Dakota Republicans! Also: you're dangerously f*cking insane.