Cry Me A River, Billy Ray 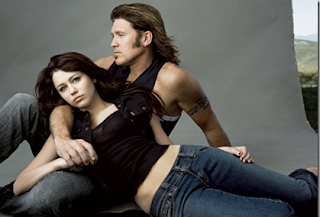 "I'm scared for her. She's got a lot of people around her that's putting her in a great deal of danger. I know she's 18, but I still feel like as her daddy I'd like to try to help." - Billy Ray Cyrus, telling GQ magazine that he is worried about his daughter, Miley. NOW he's worried. That's cute, Billy. Papa Cyrus admits that he was more of a friend to Miley than a parent, hence facilitating her descent into poll-dancing, salvia-smoking, barely-dressed pop tartery, but he insists that he was not allowed to participate in decisions about her career and that he has long objected to its trajectory. Hmm. That's weird, because I am certain I remember Billy Ray defending 16 year-old Miley's stripper pole routine, saying, "You know what? I just think that Miley loves entertaining people. I always tell her to love what you're doing and stay focused for the love of the art and not worry so much about opinion." But then, Billy doesn't take too much responsibility. In fact, he says that his family is...wait for it...under attack by Satan. Quoth he of the achy and breaky heart, "We are right now. There is no doubt about it...Entering this industry, you are now on the highway to darkness." (Did I mention Billy Ray is promoting a new album?) Billy Ray also blames "Hannah Montana," claiming the show "destroyed [his] family." (Did I mention that Billy Ray was on the show, too?). What a crazy life you've had, Billy! All these invisible people and entities forcing you into making bad decisions for your child! Horrible! Hey, I have a great idea. Stop trying to exonerate yourself and talk to your kid. JACKASS.
Posted by Renée Z. at 9:17 AM