I'm All Set With This Clown 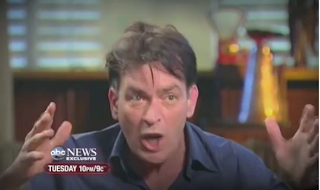 "Pu**y. He's not allowed to quit. So you're fired." - Charlie Sheen, responding to the news that his publicist, Stan Rosenfield, had quit. Rosenfield's resignation comes on the heels of Chuckie's appearances on Today and TMZ in which he called himself "a total rock star from Mars"and demanded a raise to $3 million an episode before he would return to work on "Two and a Half Men." Of course, no one has asked Chuckie to come back to work, so I think it's safe to say the pay increase is off the table. Both interviews evinced the fact that Charlie is suffering some sort of delusional psychosis, drug induced or otherwise, and both interviews have solidified my commitment to ignore this trainwreck from now on. At a certain point, this sort of thing defies commentary and becomes nothing more than a tragic story of a life lost and lives ruined (Charlie has 5 kids). So, if you want to follow Charie's spiral into madness, check in with TMZ. They've got the full scoop.