There Are Almost No Words, Volume Three 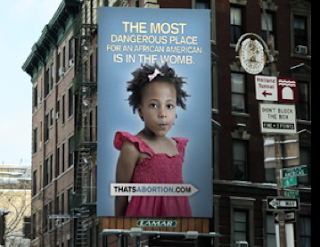 The photo you see above shows a billboard in Soho right now. Can you read it? Let me help. It says, "The most dangerous place for an African American is in the womb." Right. Because we all know blacks are shameless baby killers. The sign was erected blocks from Planned Parenthood by Life Always, a pro-life group on whose website one can read this:

There is a battle being waged in the United States that has taken more lives than any foreign war or act of terrorism. The enemy is abortion. Its' supporters include the main stream media, liberal representatives in government, and Planned Parenthood, the country's largest abortion provider. The voices of the opposition are everywhere. ThatsAbortion.com is a project of Life Always. We use advertising, research and confrontational truth to gain awareness, inform and educate individuals to choose life, always!

"Gain awareness"? Awareness of the thinly veiled racism and terror on which this organization bases it's "activism"? Yeah, no thanks. Jeezus.

The most dangerous place for an African American is in the womb [Deacon John's Space]
Posted by Renée Z. at 10:22 AM