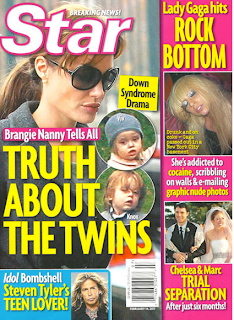 The most recent issue of Star, seen above, promises the "truth" about Brad and Angelina's twins' "Down Syndrome Drama." Yup. Look, I love a trashy magazine as much as the next shameless gossip whore, but selling magazines by exploiting children is egregious and shameful. And selling magazines by exploiting children by making baseless claims about said children's health and development is about as bad as it gets in the Hollywood smut mill. What the f*ck goes on at Star?