I Did Not Intend To Spend Friday Night With Raven-Symone

But this is just too much.

This is a photo from the Entertainment page of today's Huffington Post. Attached to the photo is this headline: "Raven Symone Shows Off Weight Loss, Long Hair." I read that, and I thought, "Hmm. Shows off? Really?" I mean, it seems to me that RSym is just at an event. In fact, put my words in the headline and you'll get my point. It becomes "Raven Symone at an event Weight Loss, Long Hair." That's all, people. Weight Loss, Long Hair. It isn't that she doesn't look fabulous and healthy. And, yeah, the hair is a drastic change from the super short curls of mere days ago, but... must we get to the "weight" straight away every single fucking time? It was bad enough when, just a month ago, HuffPost ran the headline "Thin Raven-Symone Returns To TV" and then linked to a story at another blog that had nothing to do with her weight. I suspect the lovely Raven has been invited to these events for doing something other than being thinner than she used to be, right? So, why so much about the weight, HuffPost? We get it. Fine. She's Thin Weight Loss Raven-Symone now. TWL-RSym, if you're nasty. Now, back to the real rub in today's HuffPost headline: "Shows off." Look at Raven there, all grown up. There doesn't seem to be anything at all show-offy about her countenance or posture, does there? Oh well. Just an odd word choice, I guess.

Ummmm, no. Not just an odd word choice. Because over at People.com today, one finds this photo and caption -- make sure you read the caption: 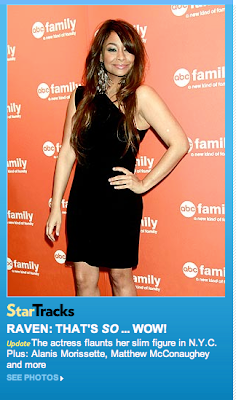 "The actress flaunts her slim figure?" What -- why? Last time I checked, "flaunting" was pretty fucking obnoxious. Look it up; you'll find words like "ostentatiously" and "parade" in the definitions. Yet when I look at this photo, I see -- ONCE AGAIN -- a woman at an event posing for photos because that's what one does at these events. Raven looks confident, as she should, and perhaps a little pose-y. But she doesn't seem to be flaunting anything. Why flaunt? Why must her weight loss involve such narcissistic, antagonistic behavior as "showing off" and "flaunting"? And before you accuse me of overanalyzing or nitpicking, remember that people who write for a living generally choose words on purpose and know what those words mean. Most of them, at least. Writing headlines and other captions at HuffPost and People.com are pretty rad gigs -- they don't give them to people who disregard the definitions of words. Trust.

So where does that leave us? With Raven-Symone flaunting her weight loss and being a show off now that she lost weight with all that weight loss. (Weight loss!) It leaves us with two major media outlets projecting onto a woman ostentation and braggartism because she...appears in public repeatedly after losing weight. I don't think I need to belabor the point. Suffice it to say, I call BULLSHIT.
Posted by Renée Z. at 9:04 PM