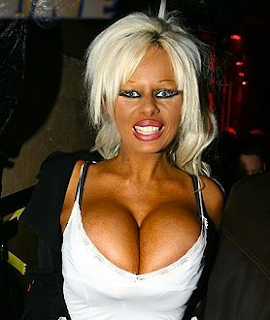 "A Snake Bit A Model's Fake Breast And Then Died." - the title of a post on today's front page of BestWeekEver.com. And it's true. Orit Fox, the Israeli model pictured above, is the victim -- and also the murderer. OFox was posing with a boa constrictor during a Tel Aviv radio station photoshoot when she decided that two ginormous knockers with an animated phallus between them is not adequately suggestive imagery and licked the snake. That's right. The girl with the giant implants licked the snake. Let's just leave that sentence alone. The snake bit Orit in response -- because he's a reptile, not an idiot. An assistant had to pull the boa off Orit's left breast, and then Orit went to the hospital for a tetanus shot. Her implants were unharmed. The snake, however, died of silicone poisoning. There are so many angles from which to approach the jokes here -- religious symbolism, ditzy overly-endowed model stereotypes, snake-licking, etc. I think I'm just going to stick with this line of logic: ladies, when am miniscule amount of the contents of your breasts kill a snake, it's time to reevaluate your cosmetic and professional choices. Just saying.
Posted by Renée Z. at 1:52 PM