And The Wining Concubine Is... 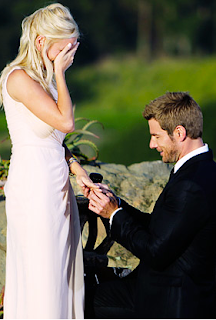 Last night was the finale of season 15 of "The Bachelor." I tried to watch it. I could not. I mean I literally could. not. The strain of steeling myself against scene after scene of cringe-inducing crapola sent me running straight to a bottle of whiskey. I mean a book. Yeah, a book. But don't let my sensitivity to contrived emotions sully the exciting news.

Last night was the fifth attempt I made this season to watch this show. And let's remember how much television I can sit through. I mean, I've watched entire episodes of "Glee," okay? "GLEE." I've got chops. But "The Bachelor" and "The Bachelorette" and their various reunions and weddings and specials...I just can't. Which is weird, because you'd think a show that involves parading 25 women in front of some dude so that he can whittle them down weekly by judging their participation in group dates while they talk smack about each other back at the brothel would entice me, right? I mean, I'm a woman! I should love watching my sisters offer themselves up to someone they've never met and then fight over him.  I do not, however. Nonetheless, I'd be remiss to ignore last night's excitement. Here's what Bachelor Brad had to say about it to Us weekly:

"I'm confident that I chose the right woman. I'm even more confident in our love and that it's very real. I mean it."

He means it, people! Really. No, really. Their love is very, very real. He means it.

No word yet on whether or not the happy couple will allow ABC to televise their very, very real wedding.
Posted by Renée Z. at 7:15 AM