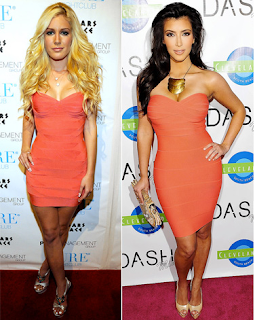 It could be worse. I guess: And by "worse," I mean "Heidi Montag." Today's the day! Kim Kardashian's first single, Jam (Turn It Up), dropped, as they say. It's...you know...Kim Kardashian singing. I'll say this much: It's good to see Kimmie working. You can listen to the song at the link. F-Bomb Café assumes no responsibility for sad eardrums or bruised souls. Enjoy! [PerezHilton]

This is cool. No, really: Holly Madison poses in the upcoming issue of "Life&Style" in a bikini and without retouching (gasp!). Says Holly, "I've always had a butt, and I want to keep it - cellulite and all. I'm not perfect, but I love my curves." Well! How about that? Healthy, normal, and formerly intimate with Hugh Hefner. How often do those 3 go together?! Well done, HMad! [HuffPost]

Until genetics are reversible, this will have to do: Michael Lohan, Jr., brother to Lindsay and son of Michael and Dina, has decided to change his name so as to distance himself from his trainwreck father. For a minute, I thought I smelled some sanity over at camp LiLo and got excited. Alas, the new and improved Michael Cameron plans to introduce his new moniker with the upcoming movie in which he stars -- a movie produced my his batshit mother, Dina. Oh well. Baby, steps, MCam. Baby steps. [TMZ]

Reproductive health: check. Marriage equality: check. The planet: check: Republicans are flying through their to-do list of destruction. After launching full-out assaults on individual rights, the GOP has turned its attention to mother nature. House Republicans have gotten rid of the biodegradable food containers and utensils that Nancy Pelosi brought to the White House and have instead returned to using plastic and styrofoam. That's cool. No use protecting the earth while everything else is going to shit, right? Grrrrr. [Jezebel]
Posted by Renée Z. at 9:39 AM