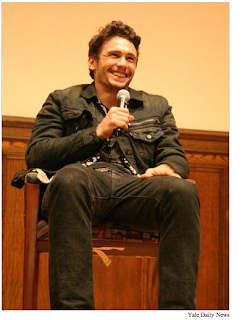 On the heels of James Franco's 420-inspired performance as Oscar host Sunday night, The New York Times published an article about the actor in yesterday's N.Y./Region section titled, "James Franco Straddles Two Roles At Yale." First, I laughed at the title. Then, I got my mind out of the gutter and read it. Third, I decided that Franco's management, not the writer Lisa Foderaro, is responsible for the piece. To wit, here is the opening of the article:

On Sunday night he was in Hollywood, as co-host of the Oscar telecast in black tie. At 9 the next morning, he was in a Starbucks in New Haven, hunched over a book and barely recognizable in a gray sweatshirt, but still wearing his tuxedo pants. James Franco, movie star, had rushed back on the red-eye to play his other big role: Yale doctoral student. By 9:25, he was at his seat in a seminar on medieval manuscripts. “I was surprised and delighted that he made it to class,” said Jessica Brantley, an associate professor of English. “He’s a dedicated student.”

The story goes on to give several examples of Franco's ability to blend in among the other students despite his fame, which is ostensibly its whole point. It's pretty clear, though, that what the story is really telling us is how hard Franco works. Reports Foderaro:

“We’re all really fascinated and awed,” said Cokey Cohen, the columnist at The Yale Daily News who drew Mr. Franco’s ire. “To see someone who has what we all consider to have an ideal life — with a fun, successful career — to be voluntarily doing so much schoolwork all the time is both really admirable and something I can’t even comprehend.” Dr. Warner said the actor’s academic ambitions were impressive. “We have had experience before with students pursuing parallel degrees,” he said, “although the scale of his obligations is something that we’ve never seen before — but who has?”


Okay. Let me translate all of this for you: JAMES FRANCO WAS NOT STONED AT THE OSCARS. HE WORKS REALLY HARD BECAUSE HE'S AN ECCENTRIC ACTOR GENIUS BOY. We get it, camp Franco. While it seems obvious that the Times article is nothing more than spin control after Franco's giant Oscar fail and as such can't be taken too seriously, might I take issue with Dr. Warner's statement? You know, "the scale of his obligations is something that we've never seen before -- but who has?" Sure, getting multiple degrees from different schools is an impressive feat, even for a celebrity with all the money and assistance necessary to make the feat possible. But I bet there's a single mom somewhere raising children, working, and attending school who is pretty familiar with the "scale" of JFranc's "obligations." Just saying. Look, I love me some James Franco, but he sucked at the Oscars. Whether he was stoned or burdened with the tired mind of an academic superstar really doesn't matter much. Taking on a lot of jobs and doing only some of them well doesn't seem to warrant a feature in The New York Times, does it? Maybe Franco should be, um, straddling less. In which case, I'd be happy to volunteer.
Posted by Renée Z. at 7:06 AM