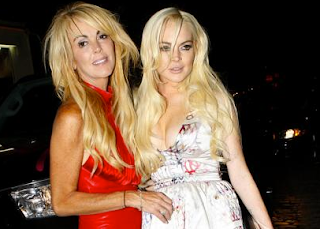 Because I just can't, let's make this as simple and fast as possible: Last night, Lindsay Lohan and her criminally negligent mother, Dina, partied at a club together. I mean, we could just stop there, right? Anyway, on the limo ride home from the club, the two women got into a fight over whether Lindsay would sleep at a hotel or her mom's house in Long Island. Trainwreck and Trainwreck, Jr. spent the entire trip from Manhattan to Nassau County fighting until Lindsay finally called HER FATHER, who called the police, who then responded but ultimately did not act since, according to a Nassau Police spokesperson, "There were no injuries and no complaints followed. There is nothing else we can do." However, a "source" (coughMichaelLohan) contradicts that report, maintaining that Lilo did sustain an injury -- a cut on her leg caused by a diamond bracelet that was broken during the row. OMG, you guys, I hope she's okay!

I don't know about you, but I for one am shocked. They seem like such great buddies, Dina and Lindsay. I mean, look at the two ladies just a year ago, celebrating Dina's 49th birthday by getting drunk and making out with each other in the club: 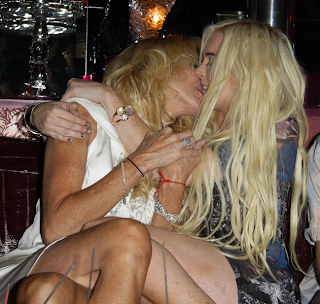 How could such a beautiful mother/daughter relationship go so wrong? Is there nothing pure left in this world? Is there no God?! WHAT ABOUT THE CHILDREN??!!

UPDATE: According to RadarOnline, the two were fighting over money. Lindsay allegedly gave Dina $40,000 and then asked for it back. What an ungrateful little shrew! After everything her mom has done for her? A good pimp is totally worth 40K, amirite?

UPDATE #2: Dear Gods I can't rehash this. Cocaine, threats, delusions, etc. The usual. You can read it here.