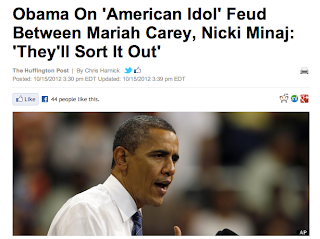 So. Just let that headline sit for a sec, K? Now, for those of you who, unlike the President, have other things to do than keep up on the fake feud between Mimi Lollipop-Bling Carey and the Cartoon Formerly Known as Nicki Minaj, you can read about it here. If, like me, you're wondering why the fuck Obama has anything to say about it, you should know that at least he didn't start the conversation. That's the good news. Some dude named Michael Yo, who evidently has a radio show in to which POTUS called, asked the Pres to weigh in on the very important tangle between Nicks and Mims. The bad news, however, is that Obama had an answer. An actual answer. Not "I don't give a shit" or "I got 99 problems, but a bitch ain't one." Nope. Obama replied, "I think that they are going to be able to sort it out. I'm confident. I'm all about bringing people together, working for the same cause, I think both outstanding artists are going to be able to make sure they're moving forward and not going backwards." Such a diplomat! And his vision is sooooo inspiring! Imagine all the jobs that will be created when Mimi and Nicki work this out! We can have a delusional diva and a caricature famewhore on the same judges' panel of a played out, fixed singing competition! YES WE CAN!