The Lady Doth Protest Too Much, Methinks 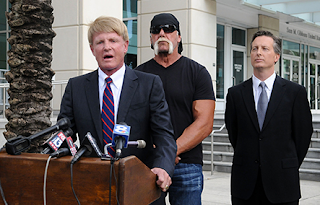 As I mentioned last week, Hulk Hogan leaked his own sex tape and is now pretending to be incensed by this anonymous violation of his privacy. Never one to back down from a fake, choreographed fight, the Hulkster is really going all the way with this little charade (by which I mean the sex tape scandal, not the genitals to which he so mercilessly exposed us all); yesterday, he announced that he is suing for $100 million both Gawker Media, who first posted a clip from the tape, and his "former" best friend Bubba the Love Sponge, who he believes gave the tape to Gawker. Whatever, dude. I think we should all ban together and sue Hulk for $100 trillion for the abject horror inflicted by his naked image. And, for the record, the funniest thing I have read about this lawsuit is over at WWTDD.com. Read it; you won't be sorry.
Posted by Renée Z. at 9:09 AM