She Should Sue Them All 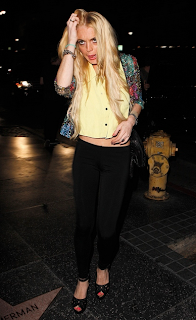 Okay, let me make this as simple as I can. On Saturday night, Lindsay Lohan met some dude named Christian LaBella at a bar (where she definitely wasn't drinking because she doesn't do that, you guys) and then took him back to her hotel room. Early Sunday morning (read: once the coke wore off), Lilo says that she and Monsieur LaBella got into an argument over cell phone photos he'd taken of her, after which the guy threw her to the ground and choked her. Lindsay called the cops, and her alleged attacker was charged with assault and harassment. Well, now, in what can only be called a stunning turn of events, the NYPD has dropped the charges against LaBella because detectives have determined that Lilo's story doesn't check out. I, for one, am stunned. Never mind the fact that valuable law enforcement time and money is being used to indulge the deluded ramblings of a convicted thief -- this is a travesty of rectitude! I demand a recount! JUSTICE FOR LINDSAY! FREE WINONA! AT-TIC-A! AT-TIC-A!
Posted by Renée Z. at 10:32 AM