Yeah, I'm As Surprised As You Are 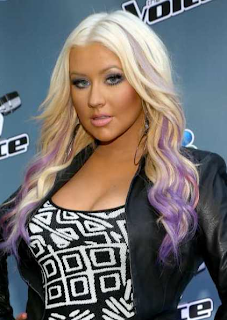 In the ongoing, critically important debate that is Britney vs. Christina, I've always been Team Britney. Don't get me wrong: CAg is clearly the better singer; we all know that. But she seems like kind of a douche, right? I mean, People.com has an entire photo gallery devoted to Xtina's "feuds" with other celebs. So I've always had a soft spot for little-girl-gone-personality-disordered-conservatee BritBrit. But today I am going to give props to Hissy Fit Chrissy, who told Billboard Magazine that after her label pressured her to lose weight for her 2006 Back to Basics tour, she told them to suck it this time around. Says Christina:

"I told them during the Lotus recording, 'You are working with a fat girl. Know it and get over it.' My body can't put anyone in jeopardy of not making money anymore -- my body is just not on the table that way anymore."

Let's not discuss the part about how her body once was on the table that way, because she didn't start that fire. Imma put my fingers in my ears and hum through that bit. For now, I just want to give props where props are due. No snarky comments, no backhanded compliments. I swear. See? I am not thinking of any jokes involving the words "dirrty genie in a bottle." Nope. Not one.