Well It's About Fucking TIme 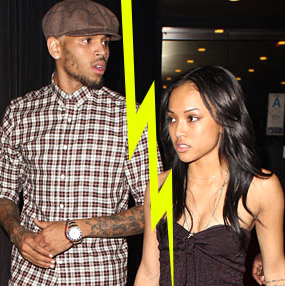 Word on the street is that Chris Brown's girlfriend, Karrueche Tran, has finally dumped his whiny ass in the face of reports that King Asshat has been getting a little too close to Rihanna. Now, first of all: Good. But, second of all: What the fuck? She was okay with him beating the shit out of his ex, but kissing her is off limits? Whatever. As for Breezy himself, the little jerk told Pus Weekly, "I love Karrueche very much, but I don't want to see her hurt over my friendship with Rihanna." Mm-Hmm. Considering Chrissy's track record of hurting those he "loves," I'd say KTran made the right decision. RUN, woman. Run far.
Posted by Renée Z. at 1:37 PM