One Of The Great Political Minds Of Our Lifetime Has Spoken 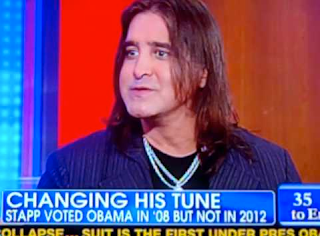 Scott Stapp, lead singer of the shitstorm, I mean, band Creed appeared on Fox & Friends yesterday to announce that he won't be voting for Obama. Okay, um, I know the election is coming up, and every vote counts and all that, but if I may be so bold, I'm going to have to say NO ONE CARES, SCOTTY. I mean, we're talking about the man responsible for this:


If you haven't stabbed yourself in the eyes, here's a quotation from Mr. Stapp's interview over at Fox: "My heart and soul would really like someone like Reagan or FDR to come back and give us a new deal." Reagan? REAGAN? Yeah, that'd be swell! The man who once called Medicaid recipients "a faceless mass, waiting for handouts" and who, during his presidency, managed to ignore AIDS, give huge tax breaks to the rich, fund terrorists, and increase unemployment? Great idea, you clown. Get a haircut, lay off the Juvederm, and stick to what you do best -- oh wait. What is that exactly? JUST ASKING.