Do You Hear That? 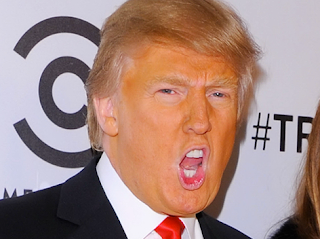 Listen closely...do you hear it? That annoying buzzing sound? That, my friends, is the buzzing most commonly associated with the rare and (hopefully) endangered animal Asshatis Megalomaniacus, known commonly as Donald Trump. Last night the trichochallenged Donny tweeted his reaction to the election results. Quoth the Donald, "We can't let this happen. We should march on Washington and stop this travesty. Our nation is totally divided! Let's fight like hell and stop this great and disgusting injustice! The world is laughing at us!" Correction, Donald: They're laughing at you. I'm not sure how a democratic election equals a "disgusting injustice," and I'm pretty sure that greedy, 1%er, misogynistic, bigoted assholes like Trump have more to do with dividing the country than Obama or even Romney, but whatevs. I mean, come on; I'll get a tattoo of Romney's face on my ass if Donald Trump ever marches on Washington or "fights like hell" for anything other than his own swiftly disappearing relevance. Keep talking, Donny. You clown.