Taylor Momsen is a problem. If you don’t know who Taylor is, have a look: 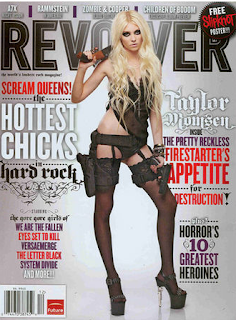 Taylor just turned 17. For a few years she has been on the show Gossip Girl. She is also the lead singer of a rock band called “The Pretty Reckless,” and she recently signed on as the face of Madonna’s new clothing line “Material Girl.” I have given TMo a lot of flack over the last months, partly because I got bored of picking on Miley, and partly because TayTay can’t keep her mouth shut, and she’s always prattling on about knives or dog shit or porn. Seriously. Between Taylor’s armed lingerie and Miley’s stripper pole prowess, one can safely assume that many parents and media professionals have ignored the poignant cautionary tales known as Britney Spears and Lindsay Lohan. And because, like Brit and Lilo before them, Taylor and Miley have been figuratively and literally whored out by their parents since childhood, I can’t really blame the girls themselves. Well, I can, and I do, but I don’t really mean it. The real criminals are the adults involved – parents, managers, and consumers. It’s not like I’m personally offended by stripper poles or porn in general – come on now. You’ve read my stuff, right? It’s just that I have a soft spot for this childhood thing. I’d really like to see it live on. And right now, the institution of childhood is in grave, grave danger.

Obviously, I am not the only one who finds Miley’s over-the-top sexuality and Taylor’s general debauchery to be problematic. After her Revolver issue hit the net and the stands, the Parents’ Television Council released this statement about Taylor’s cover: “By posing this way, with guns in hand, she is making guns and violence seem sexy, and contributing to the already epidemic problem of kids’ overexposure to hyper-sexualized media content, which has been linked to depression, eating disorders, and sexual risk-taking.” Now, The Parents Television Council is one of those organizations whose name alone rubs me the wrong way. I’m not so old that I don’t have a knee jerk, negative reaction to any thing that sounds like censorship or conservative proselytizing. But here’s the thing about the PTC, a group about which I admit to knowing very little: they’re right. Before anyone gets excited, let me be clear. If a child sees Taylor’s magazine cover, she is not going to run out and become a homicidal hooker. Listening to Miley’s music is not going to impregnate anybody. But the facts – the FACTS – are that Miley’s and Taylor’s fans are kids -- whether the two poptarts like it or not – and kids are negatively affected by violent and sexual imagery. Facts. And the more adult behavior we accept from kids and teens, the more we endanger childhood itself. And guess what? I have, like, scientific proof and stuff.

Here’s the dealio: Some time, usually towards the end of middle school, kids gain the ability to think abstractly. Before that, children are called “concrete thinkers.” That is, their cognitive abilities are limited to those ideas that involve facts and descriptions about tangible objects. Gradually, as the child becomes a teenager, he begins to develop his abstract thinking skills, which will allow him to conceptualize, generalize, and otherwise process ideas in a sophisticated way. No matter how smart a nine year-old is, it is almost certain that her brain is literally unable to process abstract ideas. So here is where the problem begins. By inundating kids with abstract ideas -- like the intersection of sex, love, and self -- we ask them to process very complex ideas within very simple paradigms. And, um, that doesn’t really work. Instead, the child will absorb the ideas in black and white ways. Taylor’s twelve-year old fans don’t see any irony in Taylor’s cover. They see that Taylor likes guns. Now, of course, this is what parents are for, right? OF COURSE, someone can step in and discourage the kid from internalizing the idea or else censor those things to which the child is exposed. But let’s not fool ourselves into thinking that teens are always eager to absorb their parents’ mores and follow their rules. The point is, constant bombardment with media images of sex and violence set up kids for struggles as they try to incorporate the concrete ideas they have built as children into their developing worldviews. Hence that whole depression, eating disorder, risk-taking stuff the PTC is all worked up about.

And there’s more. The whole journey of adolescence is anchored by one primary conflict – psychologist Erik Erikson called it “Identity vs. Role Confusion.” Basically, between the ages (roughly) of 12 and 18, we all try to establish our identities. Many teens do this by experimenting with different personas – that’s why they’re all so freaking nuts. I mean, I love them, but you know what I mean. The identity that a teen absorbs as her own is that which consistently elicits a reaction from her peer group and the adults in her life. If she is unable to find an identity that she can incorporate successfully into all parts of her life, role confusion results. That’s the technical explanation. Here’s the breakdown: if you tell a teenage girl that her worth is in her body, she is going to absorb her identity as a sexual object. Objectification becomes normal. With that in mind, let’s look at the fact that Miley’s parents loved her pole-dancing routine – and that Taylor’s “handlers” approve of her whole sex-and-violence thing. If you aren’t worried about the fans, think about these kids themselves. What do you think happens when a young girl is made rich and famous by slutting it up? I’ll tell you what happens: BRITNEY. Or worse.

Obviously, I am oversimplifying a lot of the psychology, and obviously it is unfair to say that these girls are destined to psych ward visits and bald heads. But we know that hyper-sexuality and violence have dangerous effects on kids. We know that the media’s sexualization of kids is big business these days. So, now what? Well, I’d like to charge Miley’s and Taylor’s parents with crimes, but you know how that goes. I’ve already tried to make a few citizen’s arrests at the mall, and people tend to react badly. Go figure. So what’s a girl – or a boy or a woman or a man or any citizen of the world who thinks childhood is important – to do? I wish I knew. I just like to complain; it’s not like I have any answers. Jeez. But at the very least, think about it. Be aware of what you support with your money and attention. And as for you, Taylor, at the risk of sounding like my grandmother, “Put some clothes on for Chrissakes.”
Posted by Renée Z. at 10:59 AM