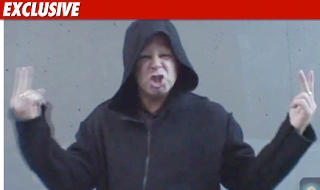 "Now I'm pimpin' Line 2/And the killer app it is/My legal fees are paid/By the dot com biz." - part of a rap song performed by Steven Slater, the former Jet Blue employee who risked the safety of thousands of people by premeditating and executing a stunt intended to garner him fame -- which also garnered him a court mandated stay in rehab. And because the world has gone mad, a cell phone app company called Line 2 has paid Slater to record a rap song. And I start doing warm shots of vodka in 3...2...1...

Oh, if you want to hear the song and watch Slater rap, well, that's your own private hell. You can see it here.
Posted by Renée Z. at 11:59 AM