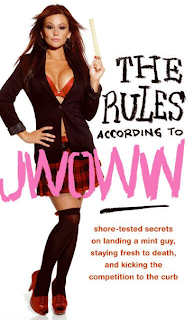 "Rule 32: Reheated pasta never tastes the same. I don’t care how great that plate of penne à la vodka was last Sunday night. When you serve it as leftovers on Tuesday, it just ain’t as good. The same goes for relationships: if you rekindle your ex-files, do not expect things to be the way they were when you first were together." - an excerpt from Jenni "JWoww" Farley's new book, The Rules According to JWoww. Yeah, she wrote a book, remember? And I'm sure she wrote every single word. JWoww always says "rekindle" on Jersey Shore. Anyway, ghost writers aside, every real Italian knows that pasta tastes BETTER reheated. So, step off, Ms. Farley. Furthermore, I don't think I have the stomach to think about food, JWoww, and ex sex in the same sentence. Gross. Just saying.
Posted by Renée Z. at 8:27 AM