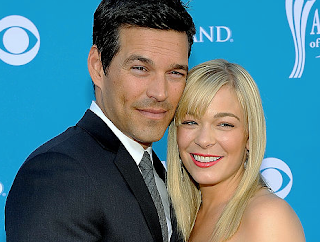 There's a NEW Father of the Year in town. Behold Eddie Cibrian, B-list actor and fiancé of country singer Leann Rimes. You might remember the much-maligned affair that brought these two together. If not, let's review: they made a movie together when both were married to other people, started having sex, denied the affair, admitted the affair, left their respective spouses, and have since run around the globe making out and filling Leann's chest with silicone. It's a true American love story. ANY'HO, the newest issue of Us Weekly reports (and therefore it MUST be true, right?) that Eddie is "tired of being portrayed as a philandering sleaze" so he has hired an image consultant. Said consultant's first move was to make Eddie "get rid of his Porsche and buy a Prius." Okay, so I guess recycling and infidelity are mutually exclusive. Kind of makes sense if you think about it. But here's the real rub: according to Us's source, "The consultant also told the actor to be seen more with [his] kids Mason, 7, and Jake, 3. 'Instead of going to a Lakers game with his buddy, the consultant insisted he bring a son.'" Awww. I love father and son time mandated by an image consultant. See you in rehab, Mason!
Posted by Renée Z. at 1:01 PM