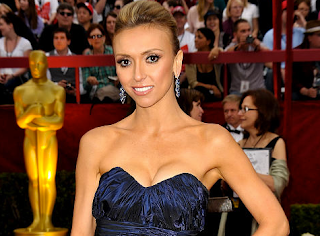 "Giselle (Bundchen) is a supermodel, and I've pinched her in real life just to see if she has body fat -- zero body fat!" - E! host Giuliana Rancic. Sounds a little crazy, no? But wait --  GRan had a reason to, uh...check Giselle's body fat. Guiliana's supermodel grope was in response to the media buzz that GRan's skinniness is the reason she can not stay pregnant. Says Giuliana, "As a woman you blame your body, you blame yourself, and I was riding that wave for a while and I was playing the blame game...It's unbelievable to me the amount of ignorant comments that come in and it's just uninformed ignorant people." Fair enough. It is absolutely ignorant that blogs and magazines reinforce the unmitigated suffering that couples experience during infertility struggles by speculating that Giulina's fatlessness is to blame. Absolutely. But, um, a little note to Giuliana: Maybe you should lay off the obsessive diet and exercise talk and that whole blogging your diet thing thing. Plus, as for the Giselle grab, proclaiming that you have personally, manually investigated a supermodel's body fat is not going paint you in the sanest, most eating disorder-free light. Just saying.
Posted by Renée Z. at 8:28 AM