Yes, Pumpkin. Yes It Is. 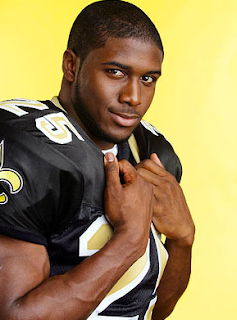 "If someone says 'no homo,' is that offensive towards gay people?" - New Orleans Saints player Reggie Bush on Twitter yesterday. Now, before you jump to conclusions and let Reggie reinforce the unfortunate stereotype of football players as ignorant meatheads, let's remember that the poor man dated Kim Kardashian for two years. That has to suck the soul, life, and brains right out of a person. But still, come on, dude. If someone says "no black man," is that offensive towards black men? Let me know, RBu.
Posted by Renée Z. at 12:39 PM