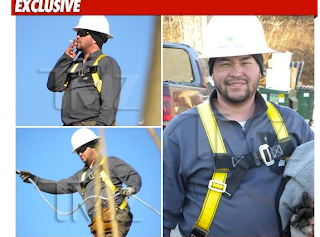 Well, lookie here: Behold Jon Gosselin, at work at his new job installing solar panels for Green Pointe Energy, a company that specializes in renewable energy. Looks like Satan reneged on that whole "sell your soul and your kids for fame" deal. But hey, a respectable job and renewable energy? Those are the easily the most positive four words ever to share a paragraph with Johnnie G. Keep up the good work, homey. [TMZ]

Let's pretend "Skating with the Stars" never happened, too: Former Real Housewife and perpetual famewhore Bethenny Frankel is on the cover of the newest Us Weekly, explaining that she used to be "obsessed with being thin." The natural foods chef and star of "Bethenny Ever After" details her lifetime of compulsive dieting and vows never to model such behavior for her daughter, 9 month-old Bryn. BFrank has basically made a career out of being eating disordered, and I have to admit that this whole thing reeks of spin. That said, at the very least Bethenny realizes her messages have been dangerous, and that's great. So for now we'll just let it go that she owns a company called "Skinnygirl."
(Just saying, Frankie. Just saying.)

Bless her little heart: Britney Spears has released a video for her single "Hold It Against Me," and it's...um...good to see Britney back to work. That's my story and I'm sticking to it. Honestly, I am totally Team BritBrit. But, you know, I have eyes and ears to protect, too. It's complicated. [RadarOnline]

I don't think the Department of Corrections will appreciate this: Christian Slater tells Details magazine that jail was, "Honestly, not so bad." Um, Chris, I think they want jail to be a deterrent, so maybe keep that little detail to yourself, huh? Slater did time for assaulting his girlfriend and a cop in 1997, when he was still under the influence of drugs and alcohol. Sober for five years with Nicorette as the only substance he still enjoys, CSlate says a lot of intelligent, compassionate things about addicts and addicition -- including a few words about reaching out to Lindsay Lohan. I think the interview is worth reading. Of course, to me, Charlie will always be J.D. to Winona Ryder's Veronica. Our love is God, Chuckie. Let's get a slushie. [Details]
Posted by Renée Z. at 9:18 AM