The Obligatory CShee Summary of Events 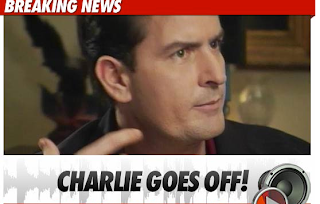 As you likely already know, Charlie Sheen went off during a radio interview last night. Here are a few highlights from his on-air rant, courtesy of TMZ:

About Two and a Half Men creator, Chuck Lorre: "a turd," "a clown," an "unevolved mind," his real name is "Haim Levine"

About his drug and alcohol addiction: "I have a disease? Bullshit! I cured it...with my mind."

About AA members: "Newsflash...I am special and I will never be one of you."

"I violently hate Chaim Levine [Lorre]...He's a stupid, stupid little man and a pussy punk that I'd never want to be like. That's me being polite. All these guys told me to 'clean it up.'  Well this is me cleaning it the f**k up. That piece of shit [Lorre] took money out of my pocket, my family's pocket, and, most importantly, my second family -- my crew's pocket. You can tell him [Lorre] one thing.  I own him."

Oh, he also challenged Lorre to a fight "in the octagon." You might be shocked to find out that in fact Charles does not own Chuck Lorre and will not be returning to work soon, as CBS went and shut down the show. Yup. After Charlie's afternoon of manic idiocy, CBS and Warner Bros. released the following statement:

"Based on the totality of Charlie Sheen's statements, conduct and condition, CBS and Warner Bros. Television have decided to discontinue production of 'Two and a Half Men' for the remainder of the season."

Oops! Looks like Charlie's "second family" -- the crew -- won't be getting paid now. I'm guessing none of them will be sequestered in the islands with coke and hookers, but maybe they'll find another way to enjoy their unemployment. Don't worry, Chuck. You just take care of yourself. You're doing great. Anyway, never one to surrender the last word, Charlie sent an open letter to TMZ. It's quite the piece of literature:

What does this say about Haim Levine [Chuck Lorre] after he tried to use his words to judge and attempt to degrade me. I gracefully ignored this folly for 177 shows ... I fire back once and this contaminated little maggot can't handle my power and can't handle the truth. I wish him nothing but pain in his silly travels especially if they wind up in my octagon. Clearly I have defeated this earthworm with my words -- imagine what I would have done with my fire breathing fists. I urge all my beautiful and loyal fans who embraced this show for almost a decade to walk with me side-by-side as we march up the steps of justice to right this unconscionable wrong.

Remember these are my people ... not yours...we will continue on together...

So, to sum it up: Charlie Sheen is a delusional, likely bipolar drug addict who refuses treatment and continues to destroy his health and career while in essence abandoning his 5 -- count 'em, 5 -- children for a life of fire breathing fists and anti-semitic slurs. There isn't much to say. This is your brain on drugs, people. Any questions?
Posted by Renée Z. at 7:26 AM