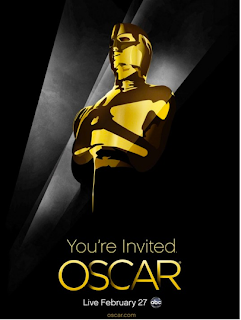 I've said it before, and I'll say it again. I f*cking LOVE the Academy Awards. Don't judge me. It is what it is, or life is short, or eat dessert first, or whatever pithy cliché applies to my immersion in fluff. Just go with it. Whether you love the Oscars, hate the Oscars, or don't care about the Oscars, you should tune in to F-Bomb Café's Live Oscar Tweets, this Sunday, starting at 4 pm with the pre-show and continuing until the last award. There will be snark and witticisms for even the most apathetic attendees. With that said, I give you my official 2011 Academy Award picks. WHOOOOOOT!

BEST PICTURE: "The King's Speech"
WHY: Because the film was nominated for 12 Oscars, more than any other movie this year, and because it has won a bunch of awards already, including a Golden Globe and SAG for Colin Firth and Best Picture at the BAFTAs. Plus, the Academy are suckers for Geoffrey Rush, period pieces, and overcoming adversity story lines. All to say: A stuttering King is basically Oscar gold. C-c-c-congratulations in advance.

BEST DIRECTOR: Tom Hooper for "The King's Speech"
WHY: Because it didn't direct itself, duh. No, really: while the Academy usually gives the Best Director award to whoever directed the Best Picture, that's not my only reason. As far as I can tell from the other awards (Globes, SAGs, etc.), the only real competition Hooper has is David Fincher, who directed "The Social Network." And I predict that Fincher will win for "The Girl With The Dragon Tattoo" next year. Yeah, I know, the film isn't even out yet, but it's not like the awards actually depend on the work. I mean, come on. So, yeah: Hooper for the win. See you next year, DFinch.

BEST ACTOR: Colin Firth
WHY: Because he has won almost every award leading up to the Oscars, and it's his turn. Jeff Bridges could have beat him had he not won last year (for "Crazy Heart," under the guiding Oscar principle we call "The Body of Work Award." See also Paul Newman in "The Color of Money."), and I think maybe Javier Bardem deserves it, but he's already sleeping with Penelope Cruz, so, you know, he's all set. Firth for the win.

BEST ACTRESS: Natalie Portman
WHY: Because she's pregnant! Have you seen her super-preggers preggy pregnant belly? Seriously, Oscar looooves a pregnant woman up on stage. But, to be fair, that's not the only reason Nat has this wrapped up. She was, in fact, really great in the part, and she performed the classic Academy Award snagging move -- transforming her physical appearance for the role, losing 20 pounds as she morphed herself into a ballerina. We call this the "Mess With Your Face/Body Award" (See also: Charlize Theron in "Monster.") Plus, we've watched little Natalie grow from precocious and charming child star to super-talented actress and fiancé of a womanizing French dude. All to say: she has arrived! Mazel Tov, Natty.

BEST SUPPORTING ACTOR: Christian Bale
WHY: Well, there's the Mess With Your Body Award (see above). Also, there is the fact that he is one of the best actors on the planet, and he KILLED IT in this role. Every once in a while that actually affects who wins, and I think this will be one of those times.

BEST SUPPORTING ACTRESS: Melissa Leo
WHY: This is a hard one. Ironically, it was the first pick I was certain about way back before the Golden Globes. And she has won just about every other Supporting Actress award so far. But then she went and took out that ridiculous "Consider" ad to promote herself, which is a little too try-hard for the Academy. But I'm sticking by Melissa Leo. She was amazing in the movie. Now let's lay low until Sunday, mm-kay Mel?

ANIMATED FEATURE: "Toy Story 3"
WHY: I'm not going to insult you with an explanation. This one's a no-brainer.

ART DIRECTION: "Alice In Wonderland" (Robert Stromberg and Karen O'Hara)
WHY: I think this was the best art direction of the nominees. That's a crazy, controversial way to pick a winner, but I'm feeling nutty.

CINEMATOGRAPHY: "True Grit" (Roger Deakins)
WHY: Because I am convinced that the Academy doesn't like Darren Aronofsky, who directed "Black Swan," which I would otherwise choose. I don't expect Aronofsky's films to win anything except performance awards -- ever. I'm not sure whose coffee he peed in, because, I mean, I love his work. Although I suspect the ascots of which he is so fond have something to do with it. Anyway, with "Black Swan" out of the way, I have to pick "True Grit," if only because that film should win something.

COSTUME DESIGN: "Alice in Wonderland" (Colleen Atwood)
WHY: Colleen Atwood is as close to a ringer as costume designers will ever have. She does masterful work that is regularly recognized as such. How rational an explanation is that? Weird.

DOCUMENTARY FEATURE: "Restrepo"
WHY: This is what we call "The Politically Correct Award." (See: Schindler's List and every documentary made about AIDS, disabled people, or soldiers. If they award the movies, it's just like activism, right?) Given the subject matter - soldiers in Afghanistan and what they endure -- this is the clear winner. Oh, and the film was really, really, powerful and masterfully made. If you're into that sort of thing.

DOCUMENTARY SHORT: "Killing In The Name"
WHY: This category is a "Politically Correct Award" minefield. The 5 nominees bring us refugee children, soldiers with PTSD, global warming, environmental crimes, and more! This was a tough one, but I'm going with the Muslim who breaks the cultural code of silence and speaks out against terrorism. Because omg you guys! Some Muslims don't kill people!

FILM EDITING: "Black Swan"
WHY: Because I refuse to give any more awards to "The Social Network" than I absolutely have to, and it will probably win this category. So I'm betting with my heart and throwing it to the kooky ballet movie. That's my reason. Oh, and my raging girl-crush on Mila Kunis that has nothing to do with film editing. That too.

FOREIGN LANGUAGE FILM: "Biutiful" (Mexico)
WHY: Because OH MY G-D did you SEE Javier Bardem's performance in this film? This movie is so freaking beautiful (no pun intended) and resonant that if it doesn't win, I'm going to...do absolutely nothing. But it will be unjust.

MAKEUP: "The Wolfman"
WHY: Because it has wolfmen.

ORIGINAL SCORE: "The King's Speech" (Alexandre Desplat)
WHY: Because musicians love Desplat, and the Academy loves movies about monarchies.

ANIMATED SHORT: "Madagascar, a Journey Diary"
WHY: Um...instinct? Really, sometimes one nominee jumps out at me for no reason. I think some of you call that "guessing."

LIVE ACTION SHORT: "Na Wewe"
WHY: See above. I'm guessing. Also, I think there is some Politically Correct Award stuff  here. You know, Rwanda, genocide, that sort of thing. That said, I want "The Crush" to win, because I loved it.

SOUND EDITING: "Tron: Legacy"
WHY: Look, I never pick the sound awards correctly. So does it matter what my reason is? No matter what I pick, it will lose, so don't pay any attention to this one or the next one, okay? Stupid sound. It's not like it matters.

SOUND MIXING: "Inception"
WHY: See above

VISUAL EFFECTS: "Inception"
WHY: Because people loved this movie, but I think the biggest award it will get is for Nolan's screenplay. I'm suspect they'll throw Nolan's team this one, too. Call it the Consolation Award.

ADAPTED SCREENPLAY: Aaron Sorkin ("The Social Network")
WHY: Because despite the fact that this script was a piece of shit, everyone but me seems to think it was some sort of masterpiece. So there's that, plus the fact that Sorkin just beat his cocaine addicition, and Hollywood loves that stuff (as they should, of course). I think Aaron Sorkin seems like a super rad dude; I would love to have dinner with him (cut to ASork leaping with joy). But part of me will die inside when he accepts this award. Alas, the show must go on...

ORIGIBAL SCREENPLAY: Christopher Nolan ("Inception")
WHY: This is another Body of Work award. In Nolan's case, his body of work is fortified by his graceful and touching navigation of Heath Ledger's death as it related to the Batman movie;  Hollywood loves a touching tale of friendship and life lost. Ugh. More to the point, people loved this film, and the Academy loves Christopher Nolan. And, okay, fine, the screenplay was good. Nolan for the win.

There you have it. Tune into our Twitter feed Sunday and heckle me when I lose! It's fun for the whole family!
Posted by Renée Z. at 11:34 AM