Oh, You Mean This? 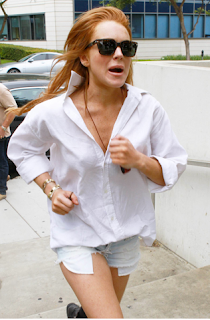 You might have heard by now that Lindsay Lohan is involved a little jewelry theft. I mean, allegedly. According to TMZ, the owner of a Los Angeles store filed a police report stating that LiLo had walked out wearing a $2500 necklace for which she didn't pay -- but which she was wearing inside the store, according to surveillance cameras. The police were just about to serve Linds with a warrant allowing them to search her house when -- funny coincidence -- one of Lindsay's friends brought the necklace to the cops. Oops! Come on, she has ADD, remember? The adderall? She can't be expected to remember stuff like what's hers and what's not. Plus, I mean, this just makes no sense. Addicts never steal. Just saying.
Posted by Renée Z. at 6:49 AM