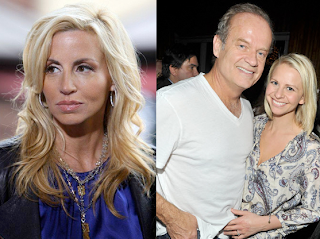 "He was too busy watching FOX News. He didn't want to cuddle." - Camille Grammer, Real Housewife and soon-to-be ex-wife of Kelsey Grammer, on "The Joy Behar Show," explaining that she and Kelsey had intimacy problems. Now, on paper, it seems like Camille has plenty of reasons to be mad: she allegedly found out via phone call and out of the blue that Kelsey was leaving her for a flight attendant after 13 years of marriage and two kids. So it was understandable when she hinted to Howard Stern that Kelsey likes to dress like a girl, and I empathized when she told E! News that Kelsey impregnated another woman during their marriage...but, WOW, Camille! FOX News? I mean, she could've said he has erectile dysfunction, or he was too busy strangling puppies, and, you know, he would maintained some dignity. But Fox News? Wow. This shiz is getting NASTY. Seriously, no one wants to get called out watching Gretchen Carlson, but it's pretty hilarious that Camille's smear campaign is resorting to Bill O'Reilly. Dirty pool CGram, dirty pool.
Posted by Renée Z. at 7:06 AM