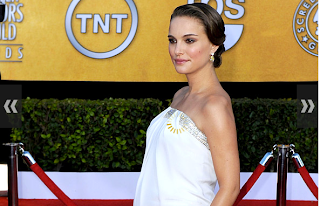 If you're new to F-Bomb, you might not know that, depsite the fact that we try to keep our posts substantive, awards show season doesn't count. While I'm not going to post any fashion reviews, I have been known to get a little caught up in, say, the Oscars. If you are interested in just how Oscar-crazy it can get up in here, you can read about it in this post. Oh, and in this one. In the meantime, please accept my disclaimer: I f*cking love the Oscars. And since the Golden Globes and the SAGs are basically Oscar foreplay, I love them, too. With that in mind, here is a wrap-up of last night's festivities:

Mark Wahlberg is the scariest man in Hollywood: What the hell is up with this "Boardwalk Empire" nonsense? Admittedly, I haven't watched it, but it's hard for me to believe that any show employing the hot mess that is Paz de la Huerta deserves all of these awards. However, Paz aside, "BE" has one thing in common with some other commercial and critical successes in Hollywood (Entourage and The Fighter to name two): Mark Wahlberg. Having watched him at the Globes and now the SAGs, I am certain that Mark is muscling viewers and votes. For real. When his material wins, he doesn't look happy. He looks like he's thinking, "That's goddam right. You just saved your kneecaps, Screen Actors' Guild/Hollywood Foreign Press/Academy of Motion Pictures Arts and Sciences." No joke. Funky Bunch or not, you don't cross Marky Mark. As a result, "BE" won two big awards last night: Best Actor in a Drama Series and Best Ensemble Cast. Which means it beat "Glee." That's right. Even cringeworthy musical numbers and rosy-faced "kids" can't steal MWahl's thunder. Be afraid, people. Be very afraid. [check out a complete list of SAG Awards winners]

Next time, I'm wearing sunglasses: I tried to focus on the awards and speeches last night, but I found myself squinting and looking away a lot. Why? The glare caused by light bouncing off of Botoxed foreheads. I mean, everyone knows that shiny skin is a Botox tell, but under normal circumstances, we're talking about just a little glossiness -- not the gamma ray that comes off a room full of Hollywood peeps. Even the three inches of makeup on each couldn't stop the immobile foreheads of death last night. Special awards to Angie Harmon and Claire Danes for Achievement in Paralyzed Muscle Visual Effects. Well done, ladies!

Natalie Portman has sex! And she curses! Look, I love me some Natalie Portman. Remember when she was in "The Professional?" She was, like, twelve -- and amazing. I loved her then and I love her now, even if I am a wee bit worried that one day she'll pop up with a quasi-English accent and a pretentious website ala Gwyneth Paltrow. For now, though, I still love Nat. And it seems that grown-up Ms. Portman is assaulting America with her adulthood. First there was that whole lesbian sex scene in Black Swan (gasp! oral sex! between women! OMGGGGG!), and then she goes and gets knocked up (and she's not even married! whore!), and now NPort is assaulting us with her terrible language and salacious jokes! At the Globes, Natalie pointed out that her costar and babydaddy "totally wants to sleep with" her, and last night she...wait for it...wait for it...said "asshole" on stage. Imagine? I guess that's how she was raised. But don't worry, Natalie's rebellious irreverence did NOT go unnoticed. The shameless smut pushers at the HuffPost took Nat to task this morning, asking if she is the "raunchiest leading lady" in Hollywood. Um, for saying "asshole" and admitting her pregnancy was not an immaculate conception? Well, I suppose someone has to watch over these ladies. We can't have intelligent, scandal-free women talking sex and swearing. Oh the humanity!

Best Red Carpet Line Ever: Jesse Eisenberg is my new BFF (cut to him shrieking with joy). Last night, the absolutely awful Giuliana Rancic was interviewing the star of "The Social Network" when she asked him how he made it to the awards in L.A. after hosting SNL in New York the night before. Quoth Jesse: "On an airplane. Those are very efficient." Despite the Eisenberg awesomeness, GRan was not deterred. She went on to treat Glee's Chris Colfer with all the sterotyping disrespect an idiot can muster. Thanks anyway, Jesse. And, Giuliana: stop talking. Forever.
Posted by Renée Z. at 1:36 PM