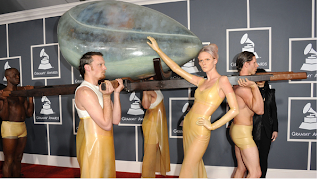 I didn't know Madonna was scheduled to perform!: Oh, Lady Gaga. I liked "Born This Way" much better the first time, when it was called "Express Yourself." Although, to be fair, it wasn't like the whole song was a ripoff of "Express Yourself." There was, after all, the spoken word verse in the middle that was taken directly from "Vogue." I think it's fair to say that when someone starts wearing raw meat dresses and prosthetic shoulder tips, she's out of ideas. Speaking of meat dresses -- and egg entrances -- what's with the dairy farm motif, LG? I guess nothing says musical genius like e-coli and salmonella.

Stereotyping sycophant says what?: On the red carpet, Ryan Seacrest was his usual obsequious self, asking the expected questions, pronouncing all his letters, and including all his verbs. Then Swizz Beatz walked up, and Ryan asked him in his best gangsta lilt, "Whachu workin' on?" Good boy, Ryan. Everyone knows you can't use proper English with hip-hop artists. Jackass.

How discriminatory! Evidently, the best way to get nominated for a Grammy is to knock-up Kate Hudson. After watching and hearing Muse perform, I can't think of any other reason why they were there. Seems like a lot to commit to just for an award, but I'm not one to judge. Oh, wait a minute; yes I am. Look, I'm fine with this loophole, as long as they set up an equivalent for women. I request Bruno Mars. Let's make that happen, National Academy of Recording Arts and Sciences. Mama needs a cute trophy for her shelf. And a Grammy would be cool, too.

Holy 1986, Batman: Okay, so, haters gonna hate, but I have no gripe with Justin Bieber. He seems like a nice boy, and, come on, we could be dealing with MUCH WORSE. As for Usher, he's kind of a self-satisfied tool, but the boy can dance. Put the two together and what do you get? You get Starlight Express meets Breakin' 2: Electric Boogaloo. That number was a big bucket o' suck. Sorry, gentlemen.

Alarms are sounding at Urban Outfitters around the country: Both Mumford and Sons and Avett Brothers were awesome last night, but I was surprised and a little scared that the Grammy people put them on the same stage at the same time. I mean, what if their hipster force fields had crossed? There'd have been sweaters and irony everywhere! Oh the humanity!

How can I put this?: Go away, Gwyneth. I can't take much more. Cee-Lo was just hangin' out at the piano being amazing, and then Gwynnie came out with her unitard and her nasal, soul-free assault and effed it all up. In her defense, though, at least she managed to "cleanse" herself down to 95 pounds for the show. Now that I mention it, maybe that was the problem; even her voice was hungry. How about a sandwich and some silence, GPal? Please?
Posted by Renée Z. at 9:17 AM