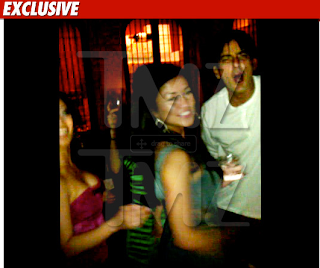 Oh my God, just shut up already: Kim Kardashian says she loves her pics in W magazine -- this after she cried about them on her show and accused the magazine of tricking her into being nude. When we last heard KKar crying about naked photos, it was after her Playboy shoot, when she whined that her mom had coerced her into posing -- only to flip later and say that she was happy to have done them. Wow, it sure is easy to trick her into getting naked. Watch out for that, Kimmie. [Us Weekly]

Bless her little heart: Tara Reid, who has parlayed her movie career into a lifetime barhopping pass (good call, T), told the audience at a Comedy Club benefit show, "We'll be doing 'American Pie 4' this year and 'Big Lebowski 2' this year." Imagine the surprise for Joel and Ethan Coen, who directed and wrote 'The Big Lebowski" and who have, um, no plans for a sequel. When informed that Tara had spilled the nonexistent beans, Ethan laughed, "I'm glad she's working on it." Look, if Tara can actually say the words "The Big Lebowksi" without slurring or falling over, I think we can give her a pass on the whole delusional psychosis thing. [HuffPost]

Want to see a coked-up white guy dance?: No? You sure? Well, just in case you don't get your fill at Trousdale, TMZ has video of Charlie Sheen dancing with hookers. It's nothing shocking, especially not at this point, but I do want to give TMZ some props for the caption on the video: "Dancing Ma-Sheen." Ba-dum-BUM. [TMZ]

No word on how the shorts felt about it: Yesterday was just plain ol' Thursday for most of us, but for Ice-T's wife, Coco, it was, of course, "Thong Thursday." For those of you unfamiliar with Mrs. T's work, every Thursday she Tweets a pic of herself in a thong. Alas, this week Coco found herself without panties, but, never one to let a technicality stop the show, she was able to improvise. Quoth the fair maiden, "I tucked my booty shorts in the top of my butt cleavage to make a thong for 'thong Thursday.' How'd I do?" Wow. Remember when there was no Twitter, and we didn't have instant access to photos of almost-famous people giving themselves wedgies? How did we get by? If you're up for it, you can see the Coco's butt cleavage here. You're welcome. [Twitter]
Posted by Renée Z. at 7:56 AM