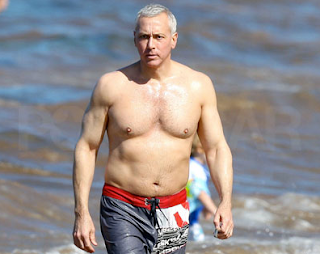 Winona taught her this one: According to "a law enforcement source who has intimate knowledge of the surveillance video" (which makes it sound as if the source has some weird VHS sex fetish), the tape from the jewelry store from which Lindsay Lohan allegedly stole a necklace shows that after Lilo put on the bauble, her male friend distracted the sales associate so that Linds could slip out with the necklace on. Says the dirty cop -- I mean source, "This simply wasn't a case of miscommunication of a necklace being loaned and not returned, as Lindsay has claimed." SHOCKING! Nonetheless, I'm still Team Lindsay. What's a little felony between friends? [RadarOnline]

Of course she did: Amber Portwood, of MTV's "Teen Mom," has leaked nude photos of herself. Well, okay, nude photos have been leaked of Amber Portwood. Fine. You say tomato, I say she's a shameless unfit mother famewhore. Anyway, if you hate yourself, you can see the photos at the link. [Egotastic]

But have you seen Drew's biceps?: Jason Davis, oil heir turned tragedy and star of last season's "Celebrity Rehab With Dr. Drew" has been charged with felony possession of a controlled substance, being under the influence of a controlled substance (heroin and a narcotic), and possessing drug paraphernalia stemming from his arrest last month. Which is weird, because one would think that a couple months in televised, fake rehab would end a lifelong bout with depression and addiction. [TMZ]

How can I put this? Oh yeah: Shut the f*ck up: Kanye West, on Twitter this morning: "an abortion can cost a ballin' nigga up to 50gs maybe a 100. Gold diggin' bitches be getting pregnant on purpose. #STRAPUP my niggas!" "Strap up" is great advice, Westie, but I'm curious: how much does abortion cost a nigga who's not ballin'? Just wondering. [Jezebel]
Posted by Renée Z. at 9:24 AM