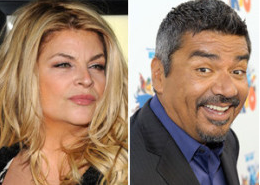 "I misjudged the joke. No malice was intended and I apologize to Kirstie." - George Lopez, "apologizing" on Twitter for calling Kirstie Alley a pig. Um, "misjudged?" Hmm. The part when he showed a pig squealing seems kind of hard to misjudge, no? And that whole "her little hooves" part? And "then she had roast beef?" I not sure how one misjudges those jokes -- unless, of course, he is referring to having judged them as funny, in which case, yeah, he was way off. Kirstie didn't accept his apology, Tweeting, "I don't need or want ur apology...I want your kidney dude..on behalf of ur X and all the women uv insulted...give it back." (As we mentioned on Wednesday, George received a life-saving kidney from his awesome and incidentally not skinny ex-wife.) Obviously I am Team Kirstie on this one, so there's no need to belabor the point, which is that Lopez is an unrepentant asshole. Rather, I'd just like to point out that this whole war went down on Twitter. At the risk of dating myself, I remember when we had to walk up hill, both ways, in the snow, without shoes, just to call each other fat and drunk in private before letting our publicists feed info to the media. Sigh.