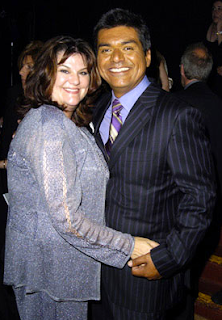 "She did a nice job. Her little hooves tapping away.” - George Lopez, calling Kirstie Alley a pig on his show last night. GLo was referring to Kirstie's performance on "Dancing With The Stars" -- a performance, by the way, in which she kicked ass. But George is more focused on fat jokes, of course. And just in case you didn't get his hilarious "hooves" dig, George continued by putting Kirstie into the "This Little Piggy" nursery rhyme: "Before the show she went to the market.  And then she had roast beef.  And this is her going all the way home.” And then he played a clip of a pig in a car. Ha! Get it? She's a pig! Because she's fat! Oh, George, that's a good one. You know, at first I wondered if maybe George's jokes weren't as offensive as they might normally be given that Kirstie has been frank about her weight struggles, even appearing on a reality show called "Fat Actress," on which she often poked fun at her diet dramas. Plus, you know, Lopez is a comedian, and they tend to offend. But the jokes are offensive, and whether or not Kirstie has acknowledged her battle has nothing to do with it. And worse, the jokes just aren't funny. Piggy jokes? Sound effects? That's the best you can do, Georgie? Pretty fucking weak for a dude with his own show. I've heard funnier insults from fifth-graders. And another thing... I was just thinking...didn't you receive a lifesaving kidney from your full-figured ex-wife? Yeah, I thought so. That's cool. Asshole.

If you want to hear George being not at all funny, you can watch him here.
Posted by Renée Z. at 10:23 AM