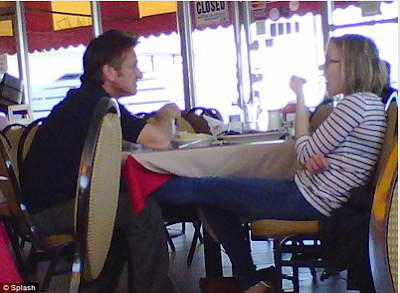 "Scarlett acted very intrigued by him. She would smile, nod her head and just listen to his stories." - a source tells People about Scarlett Johannson's and Sean Penn's dinner with friends Saturday night at Cecconi's West Hollywood. The "source" went on to confide in People that "Scarlett and Sean sat very closely and exchanged flirty looks." NO! You're kidding! By which I mean, um, no shit. In case you missed the 20,000 media reports about ScarJo and Spicoli playing footsie all over town, they are dating. It's no big mystery. That said, I understand the gossips' fascination with the couple: he's twice her age, she just separated from her husband, blah blah blah. But is it necessary to paint Scarlett as some silent little pretty thing nodding along to everything the big, smart Sean has to say? Come on. She's young, she's hot, whatever. I suspect she's not the dreamy, star-struck sycophant our "source" makes her out to be. Either way, I'd like to high five both of them. ScarSean, Pennhannsen, SeanLett, whatever: it's a whole lotta sexy. Say it's not. It is.
Posted by Renée Z. at 7:22 AM