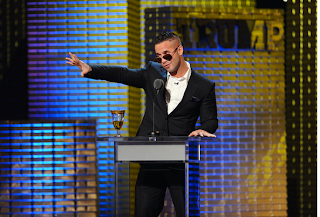 The little couple that cried wolf: Justin Timberlake and Jessica Biel are over. For real this time. No, really. After a three-year relationship which seemed to serve the primary purpose of feeding breakup speculation to bloggers and tabloids, the pair have split, and their reps have confirmed it. I blame Mila Kunis. And stop smiling, Cameron Diaz. [People]

Then they gave him a wedgie: On Thursday night, Mike "The Situation" Sorrentino appeared at Comedy Central's Donald Trump Roast and was booed off stage for, well, sucking. On top of the fact that The Sitch isn't funny, Comedy Central's writers set him up for failure, teleprompting him into telling Snoop Dogg that "he and Trump had a lot in common because Trump owned a lot of property and Snoop's ancestors were property." HAAA! Slavery's a hoot. I'm not sure The Sitch is responsible for his own behavior, but, either way, the whole thing -- crass insults, peer pressure, bullying -- sounds a lot like middle school. Which is my cue to go eat my lunch in a bathroom stall. [LA Times]

This chump again: Rand Paul continues to defy logic and decency with his drivel. At yesterday's Senate hearing on energy, Randy told Kathleen Hogan, deputy assistant energy secretary for efficiency, that it's insulting that he has to choose only the high-efficiency light bulbs while she gets to choose whether or not to have an abortion. Yup. That was his point. You can watch him trying to make it at the link. Really, RPaul's penchant for indefensible nonsense warrants its own post, but Jezebel's Irin Cameron has done the work for me. Writes Irin, "So let's get the esteemed Senator's libertarian position straight. Freedom to buy things that take an unnecessary toll on the ecosystem for generations to come: pro-freedom, pro-life. Freedom to place as many onerous, expensive, paternalistic restrictions as possible on women's reproductive organs: same. Now that's some bullshit." WORD. [Jezebel]
Posted by Renée Z. at 8:57 AM