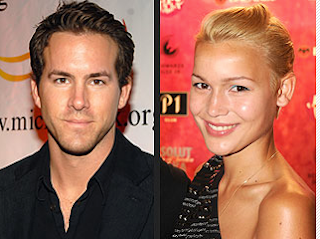 "Reynolds, 35, and Fischer were recently seen together in South Africa, where he's filming Safe House. And while Fischer is relatively unknown, the size-six German model has an impressive resumé." - from an article at People.com about Ryan Reynolds's new girlfriend, Agnes Fischer. I'm so glad the fine folks at People focus on the most important facts. I mean, at first I was surprised at how quickly Ryan and his ex, Scarlett Johannson, have moved on; ScarJo's been cuddling with Sean Penn all over town, Ryan has a new woman, and it's been only two months since Reyhannson split. But none of that matters now that I know Agnes is a size 6! Resumé, schmesumé; what else do we need to know? That explains everything!