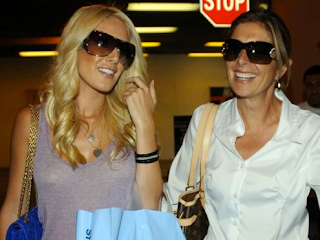 “I was loving them (the sleeping pills). I had been on them for a couple weeks when I had a bad reaction, likely because I was also drinking wine which it says not to do I discovered later." - Darlene Egelhoff, mom to the inimitable Heidi Montag Pratt, describing a night she "thought might be my last" on her blog. Darlene tells the gripping tale of her insomnia and subsequent Ambien prescription, which led to her night of near-death terror. Oh, if only the world had known about the dangers of mixing sleeping pills and booze! I mean, how could she POSSIBLY know that it's dangerous? Jackass. Frankly, I'm shocked. I'd always expected that Heidi had been raised by geniuses.
Posted by Renée Z. at 1:22 PM