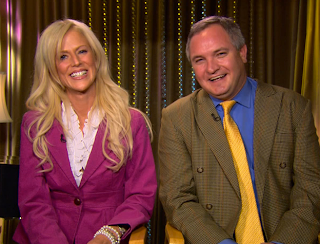 "She is devastated ... in worse shape now than when she went in." - Tareq Salahi, one half of the infamous White House Party Crashing team, about his wife, Michaele. You might remember them from "The Real Housewives of DC" and related, ridiculous press stunts. Tareq tells People magazine that Michaele's "devastation" results from being cut from the upcoming cast of "Celebrity Rehab With Dr. Drew". Why was she cut? Because she doesn't have a substance abuse or addiction issue. Rather, according to Tareq, Michaele joined the cast to have Dr. Drew "help treat her [multiple sclerosis], which has been directly affected by our ordeal with the White House. What she needs is help managing her stress and her illness." Okay, MS is a horrible, nightmarish, affliction that no one deserves to endure. That said, it was bad enough when perennial favorite Rachel Uchitel milked the "Celebrity Rehab" scene with her "addiction to love," but, come on. Michaele needs a neurologist, a shrink, and a life: not rehab. Second of all, nobody actually gets better on Celebrity Rehab. Duh. I mean, call me crazy, but if I were suffering a severe, degenerative disease, I think I'd choose a medical facility that doesn't open every treatment session with a montage of dead people set to a bad pop ballad. Just saying.
Posted by Renée Z. at 2:45 PM