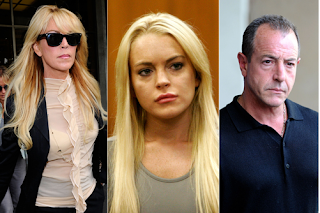 The facts: today is Lindsay's last day to cop a plea bargain in the grand felony theft case against her. She has been informed several times that since a plea bargain is an admission of guilt, she will do jail time. Lindsay has thus far refused to take a deal; if she doesn't, her case will be heard before a new, allegedly tougher judge Stephanie Sautner.

One can imagine, whether on Lilo's side or not, what an intense day this is for the girl. Right?

Add to the scene Lindsay's asshat of a father, Michael Lohan, who is currently filming "Celebrity Rehab" and plans to bring the cameras to Lindsay's day in court -- depsite Lindsay's objections, of course. Just step back for a minute and consider the scene:

A former child star, who was fed to the Hollywood wolves by two of the most narcissistic and famewhoring parents ever, is built up and torn down by the media while resorting to drugs in the absence of any real support system and finds herself facing jail time as she battles to stay sober. While her mom focuses on her next meal ticket -- Lindsay's brother's movie career -- her father signs on to a fake rehab reality show citing anger management issues and then decides to film Lindsay's demise from the lens of his own self-absorbed delusional psychosis.

All to say: TEAM LINDSAY. Work it out, girl. I don't know how you do it, but work it out. I feel you, sister. *fist pump*

UPDATE: Lilo said Hell No to a plea and will be tried for grand felony theft. Her preliminary trial will happen on April 22.

UPDATE #2: Despite getting the okay from Dr. Drew (WTF, dude?), Poppa Lohan did NOT show up at court at all -- no Celebrity Rehab cameras, no Michael. No word on whether MLo made the decision himself or if Lindsay's lawyers were able to block the cameras. Let's hope it's the latter. Even though it's the former.
Posted by Renée Z. at 7:34 AM