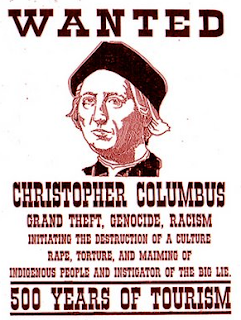 Last year I was invited to guest blog at the Americapedia website. If you haven't heard of Americapedia, let me tell you that it is the single best civics book for teens ever written. EVER. If you are a teen or know a teen, you need to get your hands on a copy, STAT. The first column I wrote for the site was about the nonsense that is Columbus Day and how ridiculous it is to celebrate it. And since I have some very, very important plans today (read: sit on my ass), I am republishing the column here. Now, granted, I wrote this column for a teenage audience, and I know most of you who read this blog are not teens. But, again, I am lazy, and, come on, if you read this website with any regularity, you know that adults are no less sophisticated than any 16 year-old out there -- present company excluded, of course. So...enjoy the column, and Happy Genocide Day! Whoot!


The streets of San Francisco have been buzzing these past few days. On Thursday, Occupy Wall Street kicked off in the city’s Financial District, and on Sunday the Columbus Day Parade shut down the streets of Little Italy. I was in both crowds – first to be heard with the other 99%ers, and then to cheer and eat with my fellow Italian-Americans. So basically I went from a rally against corruption and inequity to a celebration of, well, corruption and inequity. Oh, and genocide. Oops.
I hadn’t intended to spend the last few days of the week immersed in hypocrisy; it just sort of happened. As a vocal member of the 99% who want to end the social and economic inequities caused by corporate greed, I had to show my support at the rally, and I am planning to do so again on Saturday. Revolution doesn’t happen at home, after all. As for the parade, well, I’m Italian. I knew how to make spaghetti before I knew how to multiply. And for those of you who didn’t know, Christopher Columbus was Italian. That’s right. In fact, we don’t call him Christopher Columbus. He’s Cristoforo – Signore Colombo, if you’re nasty. To be clear, I’m proud of my Italian heritage, but I’m not so proud of ol’ Cristoforo. But it was just a parade, right? RIGHT? Maybe not. Let’s review CCo’s contributions to the world. He was paid by the Spanish monarchy to sail to Asia. He ended up in the Bahamas and then North America, never admitted he’d landed in the wrong place, tortured and enslaved natives everywhere he went, and was ultimately arrested for his barbaric acts. The destruction of the Native American culture was basically Christo’s fault. And yet we close schools and banks to celebrate him. I eat fried dough to celebrate him. It’s kind of gross, and the whole thing left a bad taste in my mouth this year. (Not the dough – the dough was awesome.) I mentioned my discomfort to a few friends at the parade, and I heard a lot of “Aw, but it’s fun” and “Don’t be such a Scrooge.” First of all, Scrooge hated Christmas, not Columbus Day, and, second of all, if a scrooge is someone who doesn’t celebrate misanthropy and death, well, then I’ll own my scroogery. At the risk of, uh, raining on the parade (sorry), I have to point out that celebrating Columbus Day is just wrong. Well, unless you’re into genocide, in which case, Look! A float!
I’m not trying to dis my Italian ancestors. On the contrary. I’ll march for Michelangelo or Maria Montessori any day. Or Galileo. Or Parmigianino. Or the person who invented gnocchi, whoever that genius is. But if I want to live in a world where people treat each other with kindness and respect, I think I should stop cheering for plaster statues of a dude who lied, cheated, and killed. I mean, I say I want a revolution. I do. I’m occupying Wall Street. And as of today, right now, you’re hearing it first, I vow not to engage in any more mindless celebrations of cruelty. That means I’ll have to make my own fried dough, and that’s just fine.