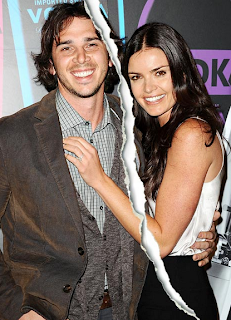 Everytime a "Bachelor" couple breaks up, a famewhore gets it wings: Blah blah blah Ben Flajnik and Courtney Robinson have split. In related news, no one cares. [InTouch]

But who will abuse the caps lock key now? Kanye West has deleted all of his past tweets and appears to be taking a break from Twitter. For more on this breaking story, read the last sentence of the post above this one. [HuffPost]

It's like "Romeo and Juliet," except not at all: In case you missed it, domestic violence aficionado Chris Brown released a video this morning on the heels of his breakup with Karrueche Tran in which he explains the torture of his lovesick heart. Quoth Breezy, "I'm a little drunk, so Imma be honest...Is there suck thing as loving two people? I don't know if that's possible but for me I just feel like that." And in case you think Chrissy is just trying to have his cake and beat the shit out of it, too, he also assures us, "I'm not trying to be a player...I just care too much sometimes." Right. [TMZ]