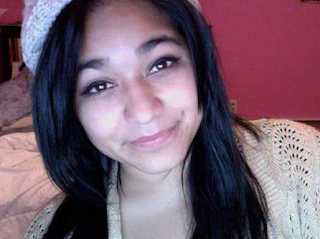 This is Felicia Garcia. She was a foster child who had lost both of her parents and who had been suffering from depression. At a high school party, she allegedly had sex with four football players. The 4 boys told everyone about it, and thereafter Felicia spent her days at school as the object of slut-shaming, harassment, and bullying -- secondary victimization, as we say. On Wednesday, the administration at Felicia's school conducted a mediation session between Felicia and one of the football players (we call this retraumatization, for the record). That afternoon, on the way home, Felicia threw herself in front of a train in front of hundreds of school mates. Shortly before, the girl had tweeted, "I cant, Im done, I give up."

If for one second you feel a twinge of "well, she did sleep with four guys at a party," I encourage you to reflect on your own decision making abilities at age 15 and then add to the mix the despair of being an orphaned foster child. Consider how difficult it must be for a child to be assertive when she has no unconditional support. Now throw in an environment that tells you EVERY DAY that, as a woman, your only worth is in your body -- oh, and that body isn't really all yours anyway. We all get to make decisions about it. Ask yourself why the girl was a pariah but the 4 football players were heroes. Add some relentless images of sexualized children, and read up a little on slut-shaming and victim-blaming.

It's the least you could do.