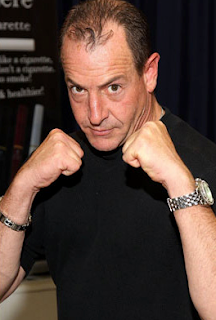 You have a new lifetime customer!

Evidently there is a TV show called Trisha Goddard (the fuck?), and on yesterday's episode, a DNA paternity test confirmed that Michael Lohan fathered a child out of wedlock back when he was still married to Dina. The girl is 17 year-old Ashley Horn; she and her mother appeared on the show after mom tried unsuccessfully for years to get MLo to pay child support. I know; you're shocked. The idea of Mikey as both a philanderer and a deadbeat dad is just too much to take, right? Holy cognitive dissonance, batman.

The big reveal was, of course, caught on video, and the clip is almost as cringe-inducing as the thought of Michael Lohan having sex (you're welcome). In it, Ashley won't let Michael hug her, confirming that she is, in fact, a sentient human being. Don't worry, Ash; two nights with your big sis Lindsay will fix that. Get yer Lohan on, girl! Cheers!