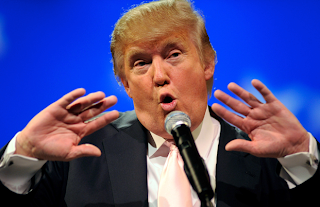 Donald Trump has been tweeting about Kristen Stewart and Robert Pattinson's relationship. Yup. Quoth he of the ladykilling orange skin-combover combo, "After Friday's Twilight release, I hope Robert Pattinson will not be seen in public with Kristen -- she will cheat on him again!" Here's what surprises me most about this: not that Donny has an opinion about two actors' fake relationship and fake infidelity; not that the thrice-married misogynist is doling out romantic advice with what I assume is a straight face; but that he has taken time out of "fighting like hell" against the "disgusting injustice" that was Obama's reelection to share his wisdom with the Twitterverse. Relax, America -- Donald has you covered. Political problems? He's on it! Love life problems? He's on it! Polluting the world with an existence that embodies almost everything that is wrong with our society? ON IT.