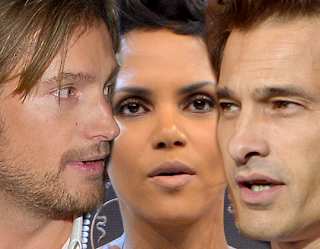 I was going to post a second update to the original story about the Aubry/Martinez row, but this deserves its own space. Lots of new details have been trickling out about this little sissy fight, but the best tidbit imaginable comes from TMZ, where it's reported that witnesses can't say what Gabriel, Halle Berry's ex, and Olivier, Berry's current, said to each other as they argued because, wait for it...wait for it..."they were trash talking each other in French." Sacre bleu! That must have been some intense and macho argument. No word on whose beret sustained the most damage.

The good news is that Berry allegedly got her and Aubry's 4 year-old daughter, Nahla, out of sight before the punches started. The bad news is that as a result of starting the fight, Aubry has now been ordered by the court to stay away from Berry, Martinez, and Nahla. So the kid can't see her dad because he had to metaphorically whip out his dick at Thansgiving. Good call, dude. Really.