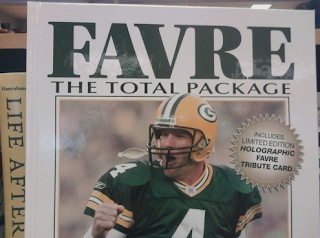 "Just nasty stuff." - what an anonymous massage therapist says Brett Favre sent her via text messages. "Mandy," as she is being called at Deadspin.com, has come forward to say that both she and another massage therapist received unwelcome, sexual messages from the football player. This is on the heels of Deadspin's release of pushy, perverted messages that Favre sent to Jenn Sterger. What a tool (a married tool, I should add). Favre stands to lose several lucrative endorsements for violating conduct rules. And I stand to lose my lunch if the press publishes any more photos of Brett grabbing his penis for the camera. Blech.
Posted by Renée Z. at 10:21 AM